Inside A Samba Parade 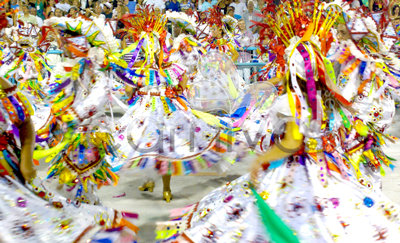 It is really not an exaggeration when someone affirms the Samba School Parade of the Special Group is one of the greatest shows on earth. That is true specially if we take into consideration the large number of people working hard for such a purpose. A Samba School is a compound of art manifestations which requires the work of sculptors, painters, dressmakers, joiners, dancers, musicians and other professionals. In addition, there is the people who live in the communities where the Samba School is based. They might work, to obtain an extra income, or to support the Schools of their heart; all gathered to provide a perfect carnival.

Each Samba School in costumes, separated in groups named "alas" (rows). They cross the avenue shook up by the singers ("puxadores") and hundreds of percussion instruments ("bateria"). The beauty of the faces and bodies appears in the highlights of their exuberant costumes and in this vibrant sound. Besides the parade is a championship and its participants are there to defend the school's shield with all their energy. The Samba Schools have to show through their plots the development of a theme based on some topics of history, social criticism, or other subject related to Brazilian culture. The directors body of a Samba School can be constituted by local residents, samba composers and cultural producers. They are responsible for the assets (samba courts, workshops, i. e..), the financial structure, the choices of plot, song, carnival planning and so on. At last, the directors' body is responsible for the most important decisions. A Samba School Guild can have a carnival organizer or a comission of carnival organizers and they will develop the ideas for the plot. In this previous phase, they will write down each detail which will take part of the parade, and, later on, they will supervise and co-ordinate the making of costumes as well as the building of floats.

People are able to parade on the ground or on floats. As it was mentioned before, people are separated in groups, forming the alas. Each ala has a costume which represents some part of the plot. In every guild, there are alas constituted only of people from the communities, or only of composers, or dancers, or people from the Old Guard. There are also the baiana's ala (here we will find usually elderly ladies who symbolize "Africa Mother" and African roots), the alas opened for the general public and the ala in which is is the School's heart - the percussion section of a Samba School.

The ala which opens the parade is called Comissão de Frente (front commission). It features around 10 to 15 integrants presenting an elaborated choreography so as to introduce the school to the public. In sequence, the Abre-Alas ("open-wings") float shows up bringing the school's symbol or shield. Other characters, mandatory presences in a Samba School, are the two Porta Bandeira and Mestre Sala's couples: the first one, a woman, is a flag-bearer and the second is her nimbly escort, dancing gracefully around her. And we should not forget to mention the queens and the princesses of the percussion ("bateria" in Portuguese): they are very beautiful women who are in front of the "bateria" keeping the percussionists exhilarated in the beat of the music.

There is no one who does not feel enchanted with the colors, forms and mainly with the energy emerged from people who dedicate themselves to this work with all their heart. The parade is really a show because the Schools count on great artists, infrastructure and high technology to make such an event possible.