All About Samba Parades
All about the parades 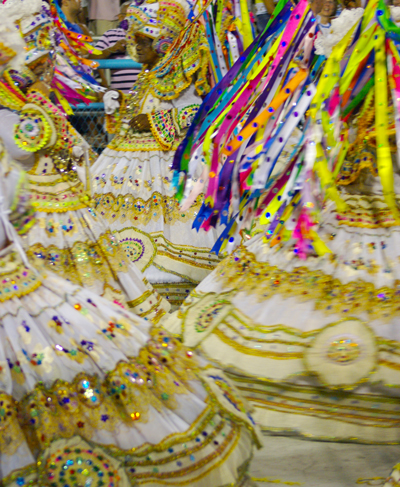 Each Samba School represents a different neighborhood or a social club. The grand Carnival parade is not a simple parade, but a competition among the schools in which the music, lyrics, themes, choreography and costumes are at stake. Schools present themselves along the Sambadrome with thousands of participants split into sections of dancers, musicians and floats.

The preparation starts as early as March or April of the previous year. Each Samba School mobilizes thousands of supporters to create the various aspects of the School's show. A theme is chosen, the music is written, costumes are created, floats are built, while the "carnavalesco" (the carnival designer) sets the choreography. By December, rehearsals begin and by Christmas, the sambas are recorded and released to record shops.

When the parading day at the Sambadrome finally comes, Schools must present their long awaited show within a strict span of time: between 65 to 85 min. They will be judged by more than 40 judges spread along the avenue who allocate points according to specific criteria.


These are some of the criteria which the Schools are judged for: