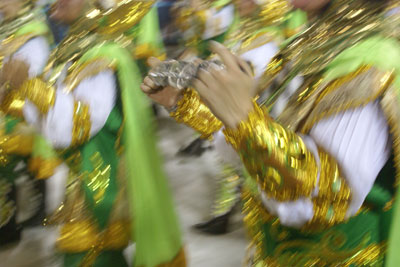 The main and most important venue of the Samba School parades is the Sambadrome, a wide parading avenue sided by several blocks of seats. (You'll know more about the Sambadrome soon)

The Sambadrome hosts 6 grand parades every year during the Carnival season: they are the competitions most awaited by the caRIOcas (Rio born people). Five of these parades involve the top Schools whereas one of them promotes the Junior Schools.


the Samba Schools of Rio

To understand the importance of the Sambadrome parades in the samba community, you have to keep in mind that there are nearly 100 Samba Schools in Rio and that the highlight of their very existence is the Carnival season with its parading competition.

Schools are ranked hierarchically into 5 groups: the SPECIAL group and groups Gold, B, C and D. Each of these Samba School groups contains between 8 to 14 Schools which compete among themselves during the Carnival season. The winner becomes the group-champion of the year. As for the Junior Schools group, it's currently composed by 18 Schools.

TIP: SAY IT IN PORTUGUESE

Want to know how to say it in Brazilian Portuguese? Have a go!

Below, we present the schedule for RIO CARNIVAL 2023 grand parades at the Sambadrome. For more details about the best locations to watch the parades along the Sambadrome, check our next section, choosing the location.

(If you're happy with the information you've had so far and wish to buy your tickets now, please proceed to Carnival 2023 Price List and/or Rio Carnival Tickets in our shopping area.)

The schedule for RIO CARNIVAL 2023 grand parades at the Sambadrome goes as following:

Now that you know the most important issues about the parades, you should check about THE LOCATION: THE VARIOUS SEATING AREAS.