The Lgbt Carnival Route In Rio 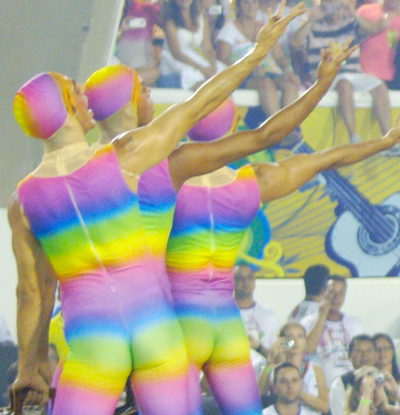 Gays, lesbians, bisexuals and drags are identities who create, recreate, reinforce or show themselves in a remarkable way mainly during the carnaval rituals. People who take part of this extense group come from everywhere to enjoy our Carnival. They are in the street festivities, in the balls or in the Samba Schools parade, events that live up the Carnival in Rio, known as one of the most famous parties (and it is also a gay party, why not?) in the whole world.

If you want to take part of the street festivities, you have one more reason to do it: they are all for free! We'll be informing you about the route as it follows. Farme de Amoedo Street is an outstanding gay place to go in Rio; it is in Ipanema, nearby the beach and it brings many national and international celebrities together. You will also find many barbies(term used for muscular gays) during the Carnival, but there are a lot of bars and cafes in which you will find a wide diversity of people. We can mention for example, Bofetada, a sort of bar and cafe.

Several street bands and groups stop the traffic at strategic points of the city and some of them constitute the "official" Gay Carnival in Rio. The Banda de Ipanema opens the Carnival festivities two weeks before the official date, organizing three parades during this great Brazilian event. This street band attracts a large number of drag queens who personify different images, from the most classical ones, such as Carmen Miranda, to the most bizarre or grotesque ones, which certainly guarantees the funniest moments with much art as well.

For those who prefer closed places, there are the classic gay carnival balls. Gala Gay at Scala, situated in Leblon, is on Carnival Tuesday and it is the most traditional one. It concentrates the most exotic personalities with the most luxurious costumes. We think it is important to warn that Scala Gay is televised, so if you don't want to be caught, don't forget to take your mask!

The Le Boy disco promotes gay balls every carnival nights, and besides the samba rhythm, there is also dance music with go-go boys' performances. Next to the Sambadrome, Elite promotes gay balls in a big samba hall on Carnival Sunday and Monday.

But if you want to change a little or if you really don't like carnival rhythms and want to escape, there are some routes in this time of the year, specially for those who enjoy e-music. Gays and lesbians can go to the X-Demente great parties on Carnival Saturday and Tuesday. These parties usually take place at Fundição Progresso, in Lapa, or along the Guanabara Bay, in Marina da Glória. The very famous B.I.T.C.H party, from which abbreviation (Barbies in Total Control Here) we can figure out what is going to happen, is on Sunday Carnival at a thematic park in Barra, or at an abandoned railroad station, in downtown. Dama de Ferro, in Ipanema (Vinicius de Moraes Street) is an alternative disco which promotes thematic parties with the most remarkable national DJ's and international guests playing live.

The Gay Carnival in Rio is, beyond any doubt, a mandatory route due to its unparallel fun and irreverence not only for gays, but also for straights without prejudices. Everybody is welcome. Finally, we cannot forget to remind you that it is in the Samba Schools Parade where all the sorts of people meet each other to watch the greatest show in the world.