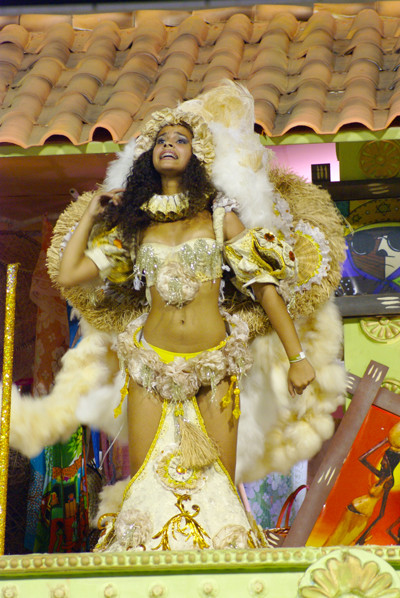 The word samba, with an African origin, is a word which probably means playing as a little goat, jumping and having fun. The African origin of Samba can be proved, for example, through the introduction, in American lands, of several musical instruments, such as cuíca, berimbau, ganzá and reco-reco. Certainly, the Africans from the large ethnolinguistic group called banto give the major contribution to the basis of Samba in Brazilian music and other manifestations.

The urban samba was born from the fusion of some erudite music elements and the rural samba. Everything started when a community from Bahia state established itself in a region between the Conceição hill, a place near Praça Mauá (as it is called nowadays), and in area called Cidade Nova, near Sambadrome. The parties of this community were characterized by the presence of choro (roughly speaking a type of Brazilian music played on a guitar or other fretted stringed instrument plus flute or clarinet and percussion) and the rural samba accompanied by hand claps, tambourine and sounds produced by plates and knives. From this unique mixture descended the Rio's urban samba. This new rhythm only acquired the actual outlines when it reached the neighborhoods where people from the lowest classes lived, showing itself as an expression of power and resistance in these communities.

The black communities of Rio de Janeiro's city created the Samba Schools, in which the yards (not courts as it is currently) were similar to a candomble's shrine in the 70's, in which only women could take part in the ritual wheel. The women are the representatives of a very usual African theme. For example, the baiana's ala, a group of is elderly ladies, refers through their spinning dance movements to ritual manifestations of the afro-brazilian religion and to the symbolization of Mother Africa.

The Samba plot is a samba song which consists of lyrics and melody created from a summary of the theme. A special period of Samba lyrics of Special Group was between 1986 and 1996 when the cultural and symbolic Afro-Brazilian universe was widely emphasized. This period includes two historical moments very important to the black people: the centenary of slavery abolition in Brazil (1888-1998) and the third centenary of Zumbi dos Palmares's death (1695-1995) - a leader of the black struggle. We can mention some references to the black culture at this period of time: the tributes to three important figures of the Afro-Brazilian universe: in 1986, Grande Othelo (G.R.E.S. Estácio de Sá), Caymmi (G.R.E.S. Estação Primeira de Mangueira) and Ganga Zumba (G.R.E.S. Engenho da Rainha); in 1988, four Samba Schools had their plots focused on slavery abolition in Brazil - G.R.E.S. Mangueira was one of these.

The Samba School plots are important vehicles for preserving and spreading some signs and values of certain social and ethnic groups almost always discriminated, which are given space in the carnival period. The involvement of lower classes with the samba's plots, through their memorization, represents a way to preserve and to spread the Afro-Brazilian culture, since the lyrics express, in certain extent, as a main or a secondary theme, the black universe. Several composers, for example, demonstrate, with their works, the social-cultural universe to which they belong.

In short, the Carnival, although synthesizes elements of other cultures, still has been one of the few spaces of expression and representativeness of Afro-Brazilian culture. The main evidence of this statement relies on the fact that Samba Schools usually have their origin in shanty-towns, slums and poor neighborhoods of the city, where the great majority of the population is ethnically black.