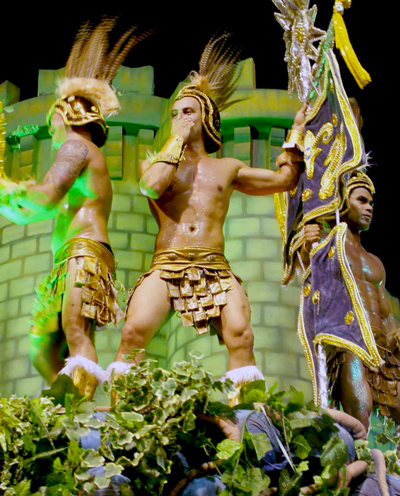 The sports and the arts are those essential things of the civilization, that move the imaginary of people. Sports and arts have been together also in the creativity, without limits to create new emotions. Sports, particularly the soccer, and the arts dialogue in several ways, be by the theme, by the infinite possibilities that both contain, by the limits imposed by the "frontier" with the real world determined by the green rectangle of the lawn, or by the margins of a canvas.

The soccer has a lot of dimensions and they are interlaced, forming a wide, varied and global mosaic. It can be faced as a show, competition, ritual, metaphor, celebration, synthesis, catharsis. And all of this at the same time. But there is not just soccer. Although the group of rules, the stage and the base of the repertoire are common, each society has its own way of playing and of twisting, result of its history and culture, and of the interaction of its history and culture with the other ones. The soccer has, therefore, a dimension that integrates the others: it is a cultural construction. To approach it as a cultural phenomenon, in its multiple relationships with the group of signs and of the local artistic expressions and planetary, it can be, at the same time, a significant and developing experience, especially when it gets ready a new World Cup.

More precisely, with its dances, its fights (as the capoeira) and all the symbolism of the own Portuguese language expression that identifies a confused movement of the body (that used to allow to the weaker pursued guy to liberate himself from the stronger one, deceiving him), as an attitude, a posture, a way of being, to think and to feel: it swings her of the samba, of the carnival. The soccer is played with the feet, the legs and the waist, and good part of the cultural manifestations that were formed in Brazil starting from the mixture of blacks, Indians and Europeans base on the movements of feet, legs and waist. And in the swings. It was necessary less than 20 years to the mestizos take possession to the English soccer, mix those movements, transform their swings in dribbles and create the "Soccer-Art", expression with that the world consecrates the Brazilian way of playing.

The soccer that emerges from this appropriation, from this exercise of applied cultural anthropophagy, from the resignation of a foreign credo, is at the same time the synthesis of a cultural construction and a metaphor of this same culture and of the society that created it. As well as the way of support. In spite of the globalization and of the crescent process of cultural homogenization today, it still can be seen in the Brazilian soccer the way (and the ways) of being, to think and to feel of the Brazilians. Their parties, their more peculiar and impressive cultural vectors, their weaknesses, their qualities. Their culture. It is the same in Argentina, in Cameroon, in Mexico, in Australia, in Japan and, of course, in Europe. There are similarities, there are mimicries. But there is above all identity. And diversity.

More natural, therefore, than to think (and to show) the soccer as cultural phenomenon on a side, and as a object of several artistic expressions, of other. They are so many the links with the parallel cultural manifestations to their statement as the most practiced and seen sport in the world, and it is not rare we find the soccer in the visual arts, in the music, in the dance, in the literature, in the movies and in the stage, in all the world.And also in the "popular culture", in other words, in the no-sainted and no-consecrated forms of expression of the individuals' subjectivity and groups that don't get the "artists'" status, although they are "artists". What is there in the soccer-art? Who are the big players? What is there about ritual, about credo, about show, about dance, about fight? And what are there about soccer in the art? In fiction? In life?