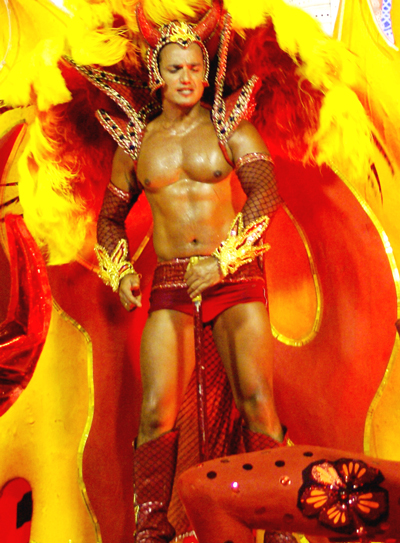 Carnival in Rio de Janeiro happens in the summer, period of intense heat, however always close to the most amazing beaches (many street bands parade in the avenues that skirt the beaches). This heat united to the rhythm of the percussion get people led to the ecstasy.

Usually, in some point of the city, there is a spree in any time of the day or of the night. But the larger focus goes to the titanic and luxurious parades of the Special Group Samba Schools (that could be compared to an opera where the floats and people that go behind them, with their allegories, present a history that is told through the beat of Samba Drums. And it is also sensational the street bands and carnival groups that go through the road with free participation. They are followed by thousands of people. Whatever be the city neighborhood or area, it certainly there'll be a carnival group and its revelry. We also can't forget to mention the Rio Carnival balls and the parades of the Rio Carnival balls in Rio Branco Avenue.

These sprees can be divided in two groups: the first one is the official period of the Rio Carnival and the other get started earlier, since the beginning of January (in some years it happens before) until some weeks after the official carnival. The commemorations in this last case become more constant and intense as the official Rio Carnival approaches (initially just happening on the weekends and after taking place almost every day). We can also remember the: Rio Carnival balls, Technical Rehearsals of Samba Schools in Sambodrome, among others. The official Rio Carnival, with its 4 days of intense spree begins with Saturday sunrise and only end in Tuesday night (actually, officially, the Rio Carnival begins when the mayor gives the keys of the city to King Momo, in the beginning of the Friday night). The festivities in the Rio Carnival are multiple, allowing to people alternate commemorations in any minutes of these four days.

And, obviously, the Rio Carnival is for every public type. The parades in Sambadrome can be attended by public of every ages (children above 5 years must have tickets). This show is only a part (even though the most luxurious one) of the whole Rio Carnival. Some balls are restricted to the adult public (over 18 years) and they are directed to specific publics (GLBT, couples, single). Most of the bands and balls are appropriate for the family public, but there are also bands and balls for each one of the mentioned specific publics. The festivities at Rio Branco Avenue are for the whole family.

During the Rio Carnival there are still alternative events in one of the most bohemians neighborhoods of the city at the present time, the Lapa, that especially fitted to the young or alternative public. There are also multiple options in the suburbs, besides those which are not official and that manifestations spontaneously created by population during the festivities.