Hold Your Heart On 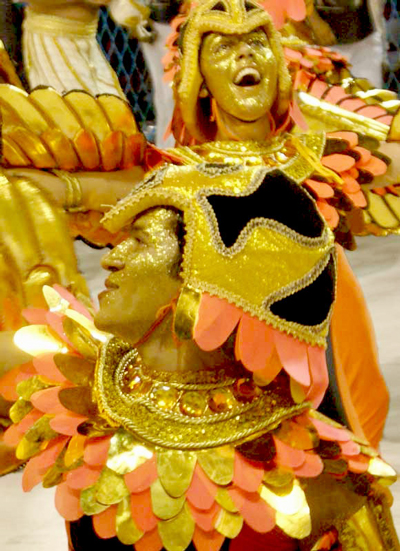 When a Samba School's parade has just finished at Sambadrome, concerns about the next carnival have already started. The LIESA (Liga Independente das Escolas de Samba, responsible for the Samba Parade's organization) and members of Samba Schools guild have the main purpose of making better parades year after year. The next year's parade has to be better than the last one. It is a very hard work which requires much planning of professionals and artists who are wholeheartedly committed to this project.

It is important to emphasize that Carnival reveals itself as a very rich cultural manifestation in Brazil. The Samba Schools' parade, for example, brings up, with their plots, themes deeply related to Brazilian history or geography; social and political criticism and so on. It brings all marvelously together: poetry, dancing, theatre, music, fine arts. In addition, there's something very interesting about Carnival: the massive participation of people who make part of the communities represented by the Schools. These communities are very poor and they are not printed on the postal cards of Rio de Janeiro city.

The great event counts on many Samba Schools' participation, being distributed among the groups: Special, A, B, C, D and E. The first three ones present themselves at Sambadrome; on Carnival Saturday group A, on Carnival Sunday and Monday Special group, on Carnival Tuesday group B. The demands for the Special Group exhibition days are the highest since the most traditional schools of Rio's Carnival belong to this group; they always provide such a fantastic show!

By this time of the year, ten of the thirteen Samba Schools from the Special group have already chosen their plots and they start to define all the costumes and allegories which will be composing the Carnival 2023.

It would be also useful to remember that the carnival date is flexible because it depends on the Christian calendar to be determined, more precisely on the Easter Sunday. Does it sound difficult? Just a little! Forty-six days before the Easter Sunday we find the last carnival's day on Wednesday; here in brazil we call it "Quarta-feira de Cinzas" (Ash Wednesday). Thus, the carnival will start a Saturday before, that is, four days before this Wednesday. Well, the really important thing to know is: the 2023 Carnival will be from the 8th to the 12th of February and the Special Group's parade will be on February 10th (Sunday) and 11th (Monday).

Be aware of the chosen plot themes as well as dates and time when each School from the Special Group will present itself. Start to think right now which schools you want to watch or parade in. It will be the best Carnival that ever happened!