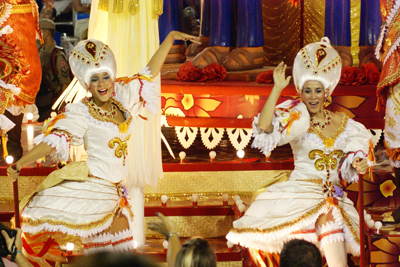 Studious have different oppinion about the origin of the word Carnival. For some, the word comes from the Latin expression “carrum navalis”, a type of float in form of boat, with which the Romans inaugurated their commemorations in centuries VII and VI. a C. For others, it appeared in 590 d. C. when George, The Great, transferred it to the beginning of Lent, the Wednesday before the sixth sunday that precedes Easter.

The right is that dance, the feasts, the songs and the celebration, were always presented in life and in the men's evolution and of the societies.

One of the most important centers of the carnival was fixed in the cities of Nice, Rome and Venice and started to radiate for the entire world the model of Carnival that still today identifies the party, with masked people, parades of allegorical cars. Many authors consider it the first Carnival.

The fancies of Carnival allowed that men and women could change their roles. In short, it was a time of inversion and total disorder.

In Brazil, the Carnival is a manifestation of popular culture. However, exactly for being a popular party, it receives influences from the folklore and the beliefs of each region acquiring characteristic of each one.

Rio de Janeiro is the cradle of creation of the samba schools, that they are the foundations of the Carnival in the Southeastern region. Thus, as many Brazilian carnivals, the Carioca folia is influenced by the black culture.

The samba schools were born of strongholds of amusement of the poor layer of the population of Rio de Janeiro, in it's almost totality black, too. They met to cultivate the music and the dance of samba and other habits of the African culture, and they almost always faced policeman repression. For the formation of those strongholds it contributed the migration of Northeastern rural populations that, attracted for the capital in the end of the century XIX, introduced a minimum of organization and felt of group to the carioca carnival, until then heir of the Portuguese carnival.

The appearance of samba schools made possible less to the layers favored of the population the chance to work in the confection of the fancies, allegorical cars, instruments, music and harmony, with the talent of each one.

In 1936, the Carioca city hall legalized the festejos and, for this, it made such requirements: the subjects had to turn around Brazilian history and were forbidden to any politics expression. Already in years 40, the Carioca schools had adopted the samba-plot, as form to join the participants of the parade around an only subject.

With the increase of components, the direction of the schools passed of samba dancers for people capable to the high financial cost of the presentations: traders and industrials. Amounts had started to be paid people in order to have a bigger success of the school. With this, part of the folkloric root and the authenticity was out, becoming the competition the main attraction of the party among the schools.

In general, in the last years, a gradual process was observed of determined aspects of the old parades, that they were exactly the essence of pureness and naivety that characterized them. The competition that were submitted the schools brought new features that satisfy the commercial necessities from citizens.

Of this form, the Carnival - as a set of political, economic, cultural and social factors that modified themselves with time - it receives direct influences from historical changes. In other words, the person and life are consequences of the moment.